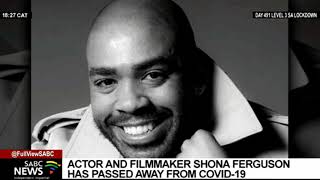 Ferguson, who was the husband of legendary actress, Connie Ferguson, died at noon due to COVID-19 related complications.

The news of his passing was shared in a media statement released by Ferguson Films, the company that he co-owned with his wife, on social media platforms earlier today.

The statement mentioned that previous media reports stating that Ferguson died of a heart operation, were false.

“It is with great sadness that we confirm the passing of Mr. Shona Ferguson. He passed away at noon today (Friday, 30 July 2021).

Mr. Ferguson’s untimely passing was due to COVID-19 related complications and not a heart operation as reported in the media,” the statement read.

“We ask that you give the family time to process this painful loss and respect their space during this time. More details will be shared in due course,” the statement concluded.

Ferguson, who was born in Botswana as Aaron Arthur Ferguson, appeared in many television series’, including Generations, Isidingo: The Need and Scandal, among others.

Wizkid took his friends to dinner and spent N3.6M

Wizkid took his friends to dinner and spent N3.6M

Top 5 Ghana's Most Expensive Estate where the Rich Live

Making transportation sustainable in Africa through bicycles and clean energy