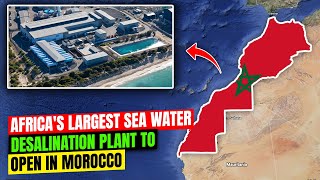 Inside Africa’s largest seawater desalination plant in Morocco – Construction work on the Africa’s largest seawater desalination plant is well on track in Morocco, according to a recent statement by a Moroccan government officials. The Douira seawater desalination plant project, which has an investment budget of US $310 million and a treatment capacity of roughly 75 million cubic meters of desalinated water per year, is located in the southern coastal city of Agadir, a major city and capital of the region of Souss-Massa, with a population of more than 450,000 people. The plant is expected to produce nearly 275.000 cubic meters of desalinated water daily before reaching its maximum capacity of 450.000 cubic meters per day.
The project comes at a time when Morocco’s water reservoirs are facing major shortages as a result of a decrease in the national average dam filling rate, which has been declining since September 2019. In a report by World Resources Institute (WRI), Morocco is among 33 countries to face extremely high water stress by 2040. The country needs to build a more efficient and resilient water management system to face the sure-to-come climate change threats, the report warned.

Did Morocco spy on French President?

Did Morocco spy on French President?