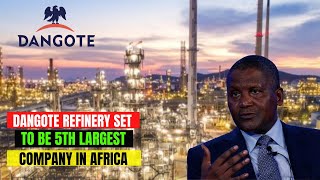 Dangote Refinery is on track to become the fifth largest company in Africa – The Dangote Refinery under construction in Lekki, Lagos State, Nigeria seems on course to be Africa’s biggest oil refinery and the world’s biggest single-train facility. Mr. Aliko Dangote is reported to have invested over $7 billion which is just over 60% of his total net worth, estimated at $11.6 billion per Forbes.
The refinery is the largest in Africa, producing 650,000 barrels of crude oil per day. The production capacity of the Dangote refinery humbly exceeds big oil refineries like Saudi Aramco’s Ras Tanura Refinery, which is the country’s largest refinery with a production capacity of 550,000 barrels per day. The Dangote refinery will be ranked 2nd in the UAE, coming in behind the Ruwais Refinery which belong to Abu Dhabi Oil Refining Company. In Iran, the Dangote refinery will be outperforming Abadan Refinery, which has the largest capacity in the country with 450,000 barrels per day.

Rihanna is now officially a billionaire, but it’s not because of her music

Rihanna is now officially a billionaire, but it’s not because of her music